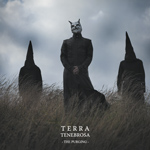 Finally! Terra Tenebrosa - The Purging 2xLP is now up for preorder.

Terra Tenebrosa returns with a strong follow-up to their critically acclaimed and Manifest Award nominated album from 2011, The Tunnels. The Purging continues where The Tunnels left off. The album takes the listener on an even more dynamic and ominous voyage through the dark mind and psyche of Terra Tenebrosa monarch, The Cuckoo.
english review / german review

European customers ordering from Trust No One will end up paying more than twice the price because shipping from Sweden to Germany/Europe is ridicilously expensive.