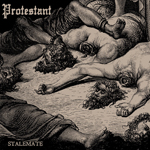 The Protestant - Stalemate 10" is up for preorder! We expect our copies around end of september/beginning of october. As soon as they arriving, we'll send them out.

This record is released in co-operation with Halo Of Flies out of the United States Of America and a bunch of other labels.

Preorder copies will differentiate slightly from regular versions within the cover artwork. We'll have only 20 preorder copies, so hurry up! 800 copies on black vinyl.