up next: Death Engine - Mud LP 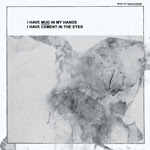 The album is due out March 2nd, 2015 on 180 gram vinyl and CD via Throatruiner Records and Apocaplexy Records. Artwork by Hugues Pzzl.